Overwatch 2 just came out, and like every new online multiplayer game, it’s not perfect yet. Players of OW2 are having trouble right now, which keeps them from working together with their friends. Here’s how to fix the Overwatch 2 error “Player is in a different version of Overwatch.”

Overwatch 2 came out on time and on the date that was planned in all areas. But a bug that says your friend is using a different version of Overwatch is making players mad because they can’t invite their friends to join their team.

But don’t worry. We have found a way to fix this problem. Just use the ideas given here, and you’ll be fine.

The Player Is Playing Overwatch In A Different Version: What’s Causing This Error?

Playing Overwatch with a group of buddies is by far the most enjoyable experience. Players of Overwatch 2 can now play cooperatively with their pals, regardless of the console they use, because the game features full cross-play support. Nevertheless, committing even a few mistakes might make the problem significantly worse.

An excellent illustration of this may be seen in the “Player is in a different version of Overwatch” issue that might occur in Overwatch 2. If something like this happens, you won’t be able to invite some of your friends to join your team. You won’t be able to participate in the game as a team.

Your close friend might not have played the most recent version of the game, which is the most significant factor contributing to this issue (patch). There may also be a problem with the server, which prevents either your system or your friend’s system from accurately determining the version of the game being played.

You can try a few different remedies to eliminate this annoying problem; it doesn’t matter what the root cause is.

Player Is Playing Overwatch In A Different Version: In Overwatch 2, How Do I Fix It?

Recently, players of Overwatch 2 have been getting the error “Player is in a different version of Overwatch” even though they are on the same patch version. This is probably because of a bug or glitch on the server, and Blizzard will fix it soon.

Here Is The Latest Game For You Which You May Like:

Until the developers fix the problem, here are some practical things you can do to improve the error on your own.

The first and most straightforward solution is to update Overwatch 2 to the latest patch version and ask your friends to do the same. On PC and consoles, the process is a little bit different. Make sure you have a fast and stable network connection before you move on.

The client will then look for updates and download files. Once the latest patch is installed, launch Overwatch 2 and see if the error goes away. If it does, you’ll be able to play with your friends.

How to Set Up Consoles:

Players on different consoles must carry out the required actions separately, depending on the platform. Below you will see the technique that needs to be followed for PlayStation, Xbox, and Nintendo Switch.

That’s it. This is how you update Overwatch 2 on different gaming platforms.

After updating the game, see if the issue is gone, and you can team up with your friends. If you are still experiencing it, try the next solution.

Solution 2: Find A Way To Get Troublesome Friends To Join The Team

The “Player is in a different Overwatch version” problem is being discussed extensively on the official Blizzard forum, which shows that players are upset. Even though most players are on the same game version, they can’t work together. 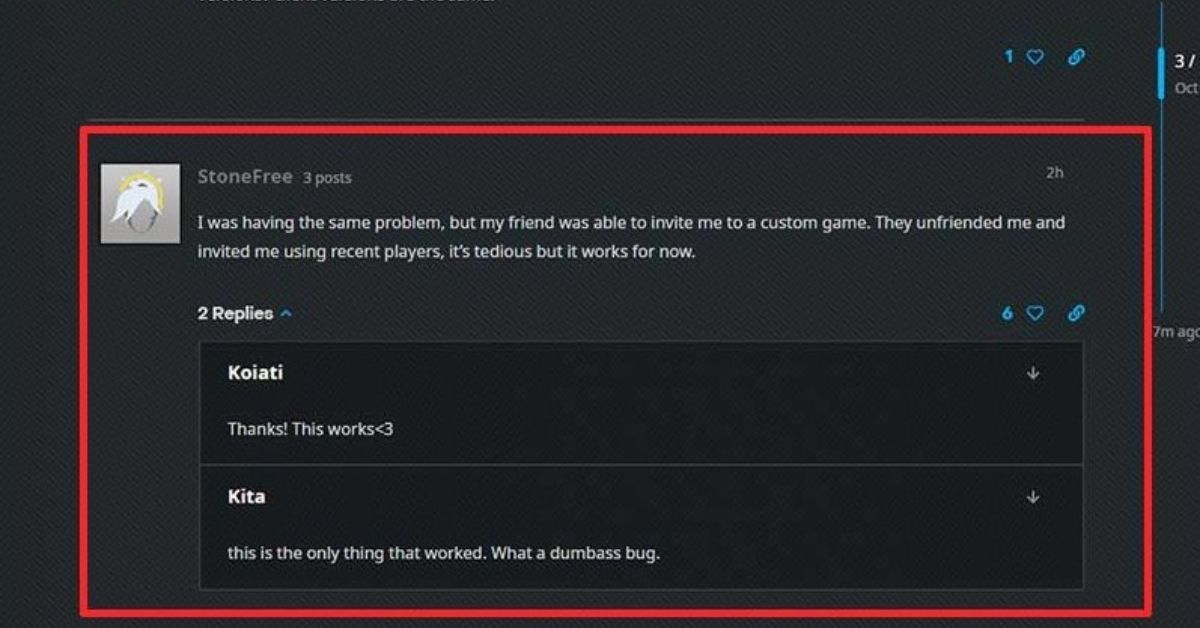 Stone free, a user of the Blizzard forums, has come up with a workaround that has helped a number of Overwatch 2 players. Several other Twitter users have also checked it out.

That’s it. You’ll be able to team up when inviting them in this manner. You can also try other workarounds such as switching network connections, changing game versions, and switching game accounts.

Wait For Blizzard To Fix The “player Is In A Different Overwatch Version” Error.

Overwatch 2 just came out, and games that just came out often have a lot of bugs. Blizzard might already be working on a patch to fix this annoying problem. Until then, you can use the solutions here to figure out what to do.

You can also send a tweet about the problem. Tag the @PlayOverwatch and @BlizzardCS Twitter accounts in your tweets. If you forgot to tag them and are a Blue subscriber in certain areas, you can edit your tweets.

Blizzard hasn’t officially acknowledged the problem yet, and players are still upset about it. On Twitter, Reddit, and other gaming forums, Overwatch 2 players continue to vent their anger. If you know how to fix this error or get around it, feel free to share them with other players in the comment box.

Stay connected to our homepage journalistpr.com for more such updates